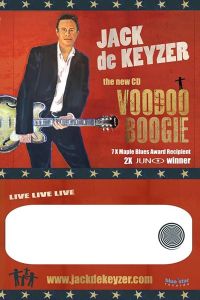 And no, I don’t mean Jack Bauer of the television show 24! I mean Jack as in Canada’s premiere blues guitarist, Jack De Keyzer. He’s got a new cd out – Voodoo Boogie and it smokes with the tones that everyone associates with Jack.

Jack is Canada’s hardest working blues musican and he proves practice makes perfect. Voodoo Boogie is the companion cd to Jack’s Live at the Corktown, which won Jack a Juno. Will history repeat itself?

Jack is the master of live performance. If you’ve never seen him live, you’ve missed out on a Canadian icon. Fortunately Voodoo Boogie will let you in on what it’s like to experience Jack at his best.

Jack is the centerpiece but his band features some of the best pros around. Dave ‘The Groove Dr’. McMorrow is on keyboard and Alan Duffy provides the bass with Danny Lockwood keeping the beat going with the drums.

The cd kicks off with the title track Voodoo Boogie and Jack asking “Are You Ready to Boogie?” You betcha we are! This tune is so Jack. You recognize right away Jack’s trademark guitar and vocals. “I’ve been down to Hamilton…Had a wonderful time” And so did the audience. This tune sets the tone for the rest of the cd.

The second cut If You Were My Woman keeps the fun going. Jack’s guitar soars while Danny Lockwood provides a solid base on drums and you just want to get up and dance. Jack sings “If I was a jet plane, you’d be my rocket fuel” and oh my, the cd really takes off.

Then there’s the stunning rendition of All Along the Watchtower. Hendrix took the Bob Dylan tune and made it his own. Ever since, musicians have tried to emulate Jimi’s performance. Not Jack. He delivers a slowed-down, beautiful bluesy rendition that will make your hair stand up on end. Only Jack has the courage to tackle such a radical interpretation.

And these are just some of the highlights. Pleasure is My Business is a great tune that should be the slogan on Jack’s business card. And wow does Dr. Groove get into it on this cut. You can tell his red sneakers are grooving to the tune. C.O.D. unleashes Jack’s guitar and wait till you hear the boogie tune Rock Till We Drop. You just have to pull out your dancing shoes and literally rock till you drop.

Others songs include You Shook Me, the Willie Dixon tune that Muddy Watters made famous and Shake Your Money Maker featuring Jack’s guitar that makes your pulse quicken. Throw in once again some great Doctor Groove jamming. The cd closes out with Cinderella with driving bass and a solo from Alan Duffy and some great tenor sax from Chris Murphy.

All in all this is a must have cd. It’s Jack De Keyzer as Canada’s king of the blues guitar. Bob Dylan once said if Jack De Keyzer lived in the U.S. he’d be famous. Thankfully Jack lives in Canada and to true Canadian blues lovers, he’s as famous as it gets.