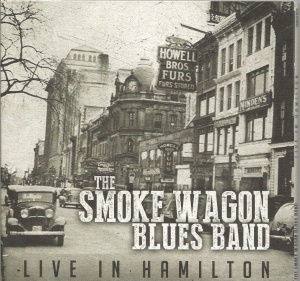 And LIVE is the operative word. Actually this cd should be called LIVELY as the Smoke Wagon Blues Band stakes a claim to its name with a smokin’ hot release.

The Smoke Wagon Blues Band was formed in 1997 and the band has gelled into one sizzling blues machine. The band consists of Corey Lueck with vocals and harmonica, Mike Stubbs on guitar, Nick Succi on piano and organ, Gordon Aeichele on sax, Jason Colavecchia on bass, and Tibor Lukacs on drums.

Billed as some of the best blues this side of Dixie, the cd was recorded at Hamilton’s music venue, Stonewall’s. It’s further proof that Hamilton is becoming a hot-bed of rockin blues. LIVE IN HAMILTON is the band’s follow up to their successful fourth cd IT AIN’T EASY.

The cd starts off with a smooth, mellow version of the classic AIN’T NO SUNSHINE. The song features Nick with great keyboard work and Gordon with some awesome sax solos. Then a hint of what’s to come unfolds when Corey’s gritty voice joins in.

Things really start to take off with the swinging Hen House Hopping.

“You better lock up your coop, The big bad wolf is comin in.”

is a line that virtually describes what’s coming on the rest of this cd. The entire band kicks it into to overdrive on this tune with great harmonica blowing, backed by a driving beat, some tasty keyboarding, and then precise guitar picking followed by sax solos. Wow this song has it all!

JOSEPHINE is a multi-layered blues tune that compels you to get up and dance as Corey leads the charge.

This cd just keeps rolling on. Other great tunes include some boogie woogie with WRONG SIDE GIRL, FINE FURRED MAMA features a foxy lady who’ll only “drink champagne from a bottomless glass”. And BARTON STREET BLUES tells the story of love for money when she states: “Well there’ sure ain’t no food on the table- But I have fixings on my plate.

And there’s LONESOME WHISTLE BLUES – it just doesn’t get an bluesier than this.

What really stands out on this cd is the integration of this band. Sax, harmonica, guitar, keyboard and Corey’s driving voice all take their turns. It’s as if this band says we’re gonna come at you with everything we have. And they sure do.